Council Meeting, which gives us the chance to meet in person, hear about what our interstate colleagues are up to, and share our vision for the coming year for the AIP.

For me it’s exciting to see the volume of activity being managed through the state branches of the AIP. Not just in the traditional talk formats—where we continue to share some of the newest and best research from around the country—but also events such as physics in the pub, careers nights and debates, which encourage interaction and sharing of ideas.

Reflecting on another grass-roots activity—our first Summer Meeting—I think we can be pleased with the outcome for this first-time event. The low-cost event featured many opportunities for our early-career researchers and students, whilst also providing a collaborative and informative space for productive discussions. I want to thank those who put time and effort into bringing this event to fruition, and I am sure there will be more discussions about how we make the most of this event in the future. Meanwhile, it’s an AIP Congress year this year, so save the dates of 9-14 December, and keep your eyes on this bulletin for calls for content.

It was also my absolute pleasure to present an award for Outstanding Service to Physics at our AGM to Brian James. Brian’s most recent contribution to physics has been editing our member-only magazine Australian Physics for the past five years. Brian deserves to be recognised wholeheartedly for the time, effort and passion he has put into the magazine during his tenure. He will be stepping away from the role in coming months. Peter Kappen and David Hoxley will be taking over the reins and I look forward to a full introduction from them in the magazine pages once they do. Read more about Brian’s award below.

And on the topic of awards, included in this bulletin are the details of a number of science prizes. I’d encourage each state branch to consider who you’ve awarded prizes to over the past 12-18 months, and to put those people forward for some of these awards. We on the National Exec will do the same. If you are working on a nomination, please let us know so we don’t double up.

From Australia’s role in the discovery of 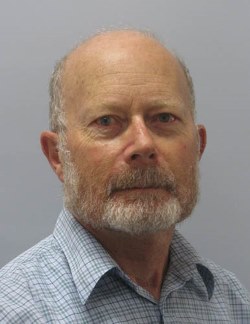 gravitational waves, to the quantum computing wave, Professor Brian James from The University of Sydney has covered a lot in his five years as the editor of Australian Physics—the AIP’s bi-monthly, members-only magazine.

Brian embraced the editorial role within the AIP, where he created an improved editorial process which ensured on-time publication at a higher quality, while also managing to save on production costs.

Not to mention his contributions to his field as an experimental plasma physicist and his two-year stint as President of the AIP. Brian served as President of the AIP during a transition period, which saw various changes to the AIP administration; the AIP input into the Decadal Plan for Physics and the AIP response to the national draft K-10 and Senior Physics curriculums. Most recently, Brian jumped at the chance to accept the role of AIP representative on the Editorial Board of the AAPPS bulletin.

He’s also undertaking the mammoth task of getting all past editions of Australian Physics up online—you can find them here: https://physics.org.au/australian-physics

Brian’s outstanding contributions to physics were recognised at last month’s AIP AGM, where he was presented with a certificate and rousing applause.

Science over a schooner, physics over a pint: your chance to present physics in the pub

The NSW branch of AIP are hosting the 2018 physics in the pub event in the second half of the year, so the time has come to grab the most entertaining (or most confident) physics enthusiast you know and put in a nomination for the evening’s entertainment.

The successful physics fan will present an eight-minute entertaining presentation of any preferred medium (comedy, music, demonstrations etc.) on some aspect of physics. If it’s physics related and can capture an audience, we’ll take it.

If you know someone who fits the bill but might be shy putting their hand up, give them a gentle nudge by nominating them yourself. A presentation statement of 200 words outlining the entertaining act is all that’s required for nomination.

On the 22 of February, AIP South Australia held a free lecture to celebrate the highest achievers in physics in the South Australian Certificate of Education (SACE) Stage 2 assessments.

The night was led by Professor David Ottoway from the University of Adelaide, who gave his presentation on gravitational wave detection and the birth of multi-messenger astronomy to a captivated audience.

A medal is generally awarded to the top achieving student of the year, whilst merit certificates are awarded to recognise those who achieved merit in physics in their final year of high school, in turn identifying the next generation of physicists in South Australia.

This year, there were two top achieving students who both shared in the glory of the Bronze Bragg Medal. The SA branch would like to offer their 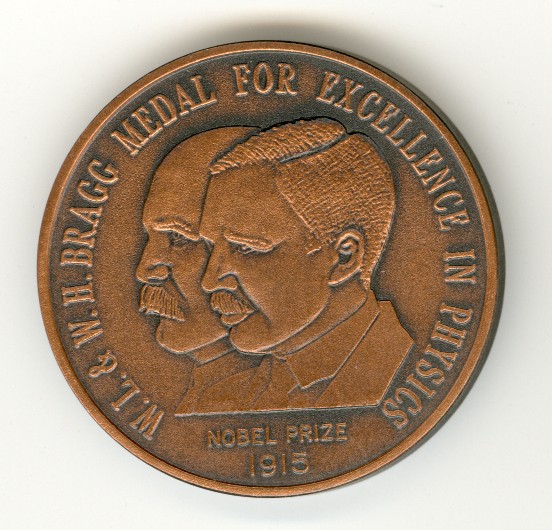 most sincere congratulations to:

In addition, 37 students were awarded Bragg certificates for having achieved merit in physics. Congratulations to all; it’s great to see so many high-achieving physics students in South Australia.

This year’s 42nd Condensed Matter and Materials meeting (endearingly nick-named the ‘Wagga’ conference) was held at Charles Sturt University where it attracted an array of international participants. 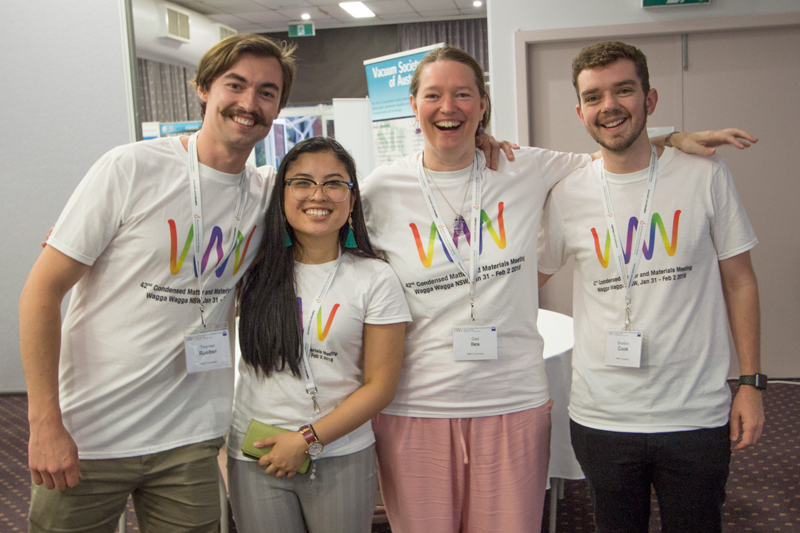 The meeting is a low-cost way to gather individuals for valuable discussion including the formation of new links over a wide range of condensed matter and materials research.

Adding some flavour to the night, the evening’s activities included an exclusive wine-tasting featuring wines solely produced at the CSU winery, an after dinner talk with Cathy Foley and a hotly-contested trivia competition.

As part of an ongoing effort to encourage and improve diversity at the Wagga meeting, gender representation statistics were tabulated and are available on the conference website. This year, the Wagga meeting achieved female/male gender parity in both Invited Speakers and Session Chairs, accentuating the diversity of the evening.

Save the date: next year’s meeting will be held from 5-8 February 2019. For information as it is announced, check here regularly.