National Science Week is happening from 11 – 19 August and physics is again well represented. There are over 2,000 events around the country. I encourage you to take part in the Week—whether you’re running an event or attending, you may inspire a next generation physicist or even come up with an event idea for next year. Read more about the physics events below.

We also welcome Dr Ceri Brenner to Australia as she has already embarked on her month-long AIP Women in Physics Lecture Tour, delivering public lectures around the country. Be sure to go and see one of her lectures—Igniting stars with super intense lasers—around the country.

The 2018 Eureka Prize nominations were announced at the end of last month—featuring physicists around the country. Congratulations to the Optical Physics in Neuroscience Team from the University of Queensland on their novel interdisciplinary research, Associate Professor Alan Duffy for engaging the public in science communication, and Dr Mohsen Rahmani for developing a new class of nanoscale surface.

In our quick survey this month we are posing a question that should affect about 1,000 of you (the approximate number of delegates to Congress). We are interested in finding out your preferences for when Congress is held: December or July. It would be great to get a large number of responses, so follow this link to take the survey.

Australian Science Innovations is also inviting the Australian physics community to submit their toughest physics questions for the Asian Physics Olympiad, which is to be hosted in Australia for the first time. Two hundred of the world’s brightest teenagers will head to Adelaide from 5 – 13 May 2019.

Don’t miss one of the 2000+ events around the country this 11 – 19 August. Here are some hand-picked physics events, with more on the National Science Week website.

We’d love your feedback for our August survey. The survey will take less than one minute and involves one question.

Take this chance to have your say on the future direction of the Australian Institute of Physics, and help us to make your membership more worthwhile. We’ll be releasing the results soon.

If you know a physicist who is undertaking promising experimental or theoretical research in nuclear physics, nominate them today for the International Union of Pure and Applied Physics’ Young Science Prize in Nuclear Physics.

The Prize consists of 1,000 €, a medal, and certificate that cites the recipient’s contributions. It recognises and encourages promising experimental or theoretical research in nuclear physics, including the advancement of methods, procedures, techniques or devices that contribute in a significant way to nuclear physics research.

Candidates must have a maximum of eight years of research experience (excluding career interruptions) following the Ph.D., or equivalent degree.

Nominations for prizes will be awarded at the next International Nuclear Physics Conference, July 29 – August 2, 2019 in Glasgow, Scotland. 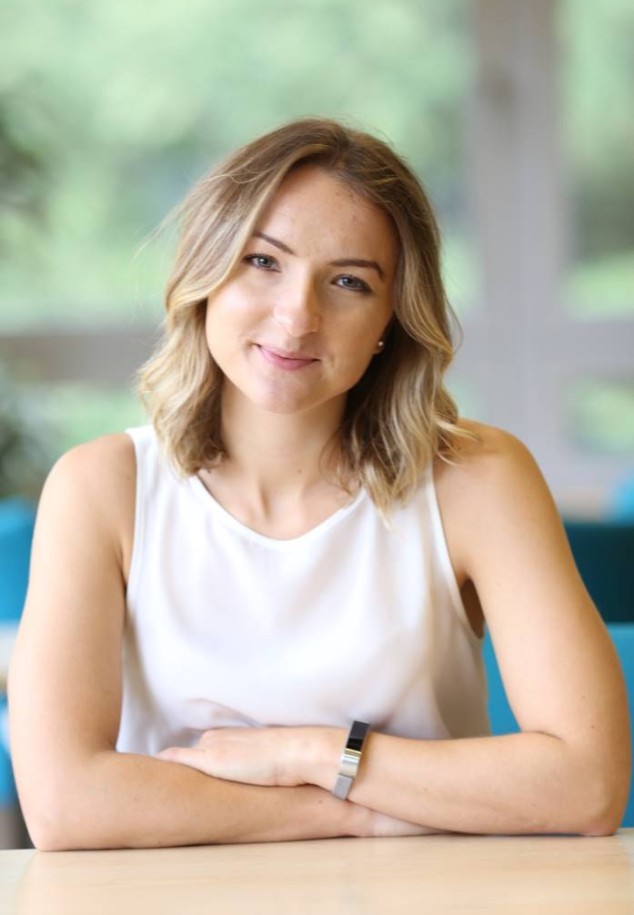 Ceri is a physicist using the most powerful lasers in the world to develop innovative imaging technology for the medical, nuclear and aerospace fields. She is passionate about application-focused research and extreme conditions physics.

Make sure you head to one of her public lectures around the country:

Spend an evening with the stars at the Vic Physics Teachers’ Network physics extravaganza on Friday 17 August at Swinburne University.

Notice to all members

The auditor McLean Delmo Bentleys, of Level 3, 302 Burwood Rd, Hawthorn VIC 3122 has resigned from their position of auditor and since the AIP is defined as a small company limited by guarantee (as defined in section 45B of the Corporations Act 2001) we are not required to replace the auditor at this time.

The 2018 Eureka prize nominations have been announced, showcasing the work of physicists around the country.

Associate Professor Duffy regularly appears in Australian media and demonstrates that astrophysics can stand alongside sport or business as a news segment. He says that “science communication is about reminding the public of the incredible world that lies beyond their everyday experiences, but is intimately connected with their everyday lives.” 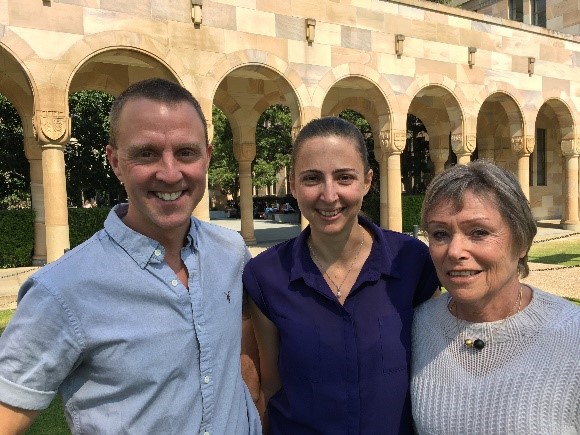 The University of Queensland’s Optical Physics in Neuroscience team (pictured left) has been nominated for their cutting-edge methods in studying how brains work to detect gravity and motion. They’ve used optical trapping and novel microscopes to successfully image the functioning brain circuits that process gravity and motion.

Dr Mohsen Rahmani has developed a new class of nanoscale surfaces that have transformed the capabilities of today’s miniaturised consumer devices. His research has a wide range of applications including night-vision technology, adjustable lenses and ultra-sensitive biochemical detectors, and several organisations are interested in commercialising his work. Dr Rahmani was also the 2017 International Union of Pure and Applied Physics Young Scientist Prize in Laser Physics and Photonics (Fundamental Aspects).

Winners will be announced at the Eureka Prize Award Dinner on 29 August, 2018.

Applications are open for the second Mentoring and Guidance in Careers (MAGIC) workshop for women and gender diverse early career researchers with a PhD in mathematical or physical sciences, awarded within the past seven years.

The workshop will explore the many facets of forging a career in academic, government or industry settings. It focuses on creating building blocks for success and resilience.

Successful applications will receive financial support for economy round-trip travel from their home institution to the workshop and will be provided accommodation from 29 October – 2 November at University House in Canberra.

Please see http://wp.maths.usyd.edu.au/MAGIC/ for further information and for the application form. Get in quick, applications close at midnight tonight (August 6 2018).

Become a volunteer for the World’s toughest physics competition: 5 –13 May 2019

In last years’ Asian Physics Olympiad in Russia, the experimental exam on photonic crystals went for five hours (have a go for yourself here). And now Australian Science Innovations want you to submit your questions for the World’s toughest physics competition, held in Australia for the first time next year.

The Asian Physics Olympiad will be held in Adelaide in 2019 and will host 200 of the world’s best and brightest teenagers from 25 countries. They’ll be in Australia for nine days of academic competitions and cultural activities, from 5 – 13 May 2019.

Australian Science Innovations is inviting the Australian physics community to contribute questions, or question ideas for the 2019 APhO exams. They’re looking for volunteers to help with judging and marking too.

Or apply to become a volunteer at the world’s toughest physics competition.

The wide and harmful reach of light pollution

There are eight billion people on the planet, and roughly one-third of them can’t see the Milky Way when they look up at the night sky.

This inability to see the galaxy that for millennia has fired humanity’s imagination and curiosity is the result of the electric lighting—on streets and in homes, across industry and commerce—that humans use to keep the dark at bay. And the widespread adoption of energy-efficient LED lighting has, ironically, made the situation even worse. 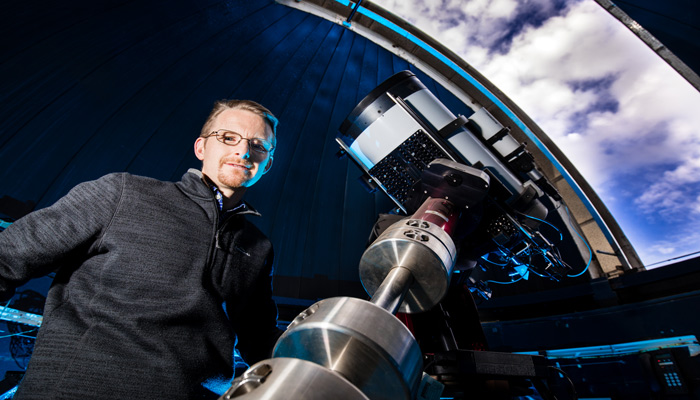 For astronomers like Dr Richard McDermid, a dark sky is all-important to their science. And it’s a no-brainer that the massive investment made to build and run observatories needs to be protected by keeping light pollution to a minimum in the areas where they operate. But, as the Macquarie University academic has discovered after looking further into light pollution, it has serious impacts right here on Earth that are only beginning to be fully understood.

There is the obvious impact of energy wastage: “there’s really no reason for us to illuminate the Universe,” Richard says, referring to the significant amount of artificial light from human activity that is visible from space, and naming street lights and domestic skylights as among some of the major culprits. However, as humans light up the night to remove the limitations that darkness places on our own activities, animals that share our environment are affected, too.

Or register for the Dark Sky Conference here: http://www.fredwatsontours.com.au/dark-sky-conference.html

Want to charge your iPhone instantly? A world-first ‘super battery’ could make it possible
www.abc.net.au/news/2018-07-21/new-technology-could-help-to-charge-your-iphone-instantly/10021086

No One Tell Australian Scientists That Nanotechnology Research Is BS, ‘Cause They Are Nailing It
www.gizmodo.com.au/2018/07/no-one-tell-australian-scientists-that-nanotechnology-research-is-bs-cause-they-are-nailing-it

Like a car aerial: tuning in from the quietest place on the planet
www.smh.com.au/national/like-a-car-aerial-tuning-in-from-the-quietest-place-on-the-planet-20180709-p4zqfg.html

How an alien seaweed invasion spawned an Antarctic mystery
www.theconversation.com/how-an-alien-seaweed-invasion-spawned-an-antarctic-mystery-99944