Australian Institute of Physics members can look forward to some exciting activities in the times ahead.

bulletin, we announce that the 2018 AIP Congress will be held in Perth. More on that below.

But in the meantime, the inaugural Summer Meeting of the Australian Institute of Physics will be hosted by the University of New South Wales from 3 – 8 December 2017.

This meeting will be a cheaper version of our major biennial congress held in the between years. With its lower registration costs it will be more accessible to members, particularly students and early-career physicists. Although cheaper, we’ll still be delivering a comprehensive science program, covering the same range of topics as the full Congress. For more information follow the conference webpage at www.aip2017.org.au.

We also have an exciting opportunity for the right member wanting the right challenge to become the next Editor of our bi-monthly Australian Physics journal. What better way could there be to get a ringside seat on the latest developments in Australian physics? If you’re interested in the role please email myself or current editor Brian James (b.james@sydney.edu.au) for more details.

And for two of our AIP members in particular, some very exciting times.

Congratulations to Dr Maria Parappilly – physics lecturer at Flinders University and head of the AIP’s Physics Education Group – on winning an International award in Teaching Innovation (Physics). She will travel to Halifax, Nova Scotia in Canada to receive her award in June.

Also to Professor Susan Scott who has been selected to join an international team of 80 women for the Homeward Bound 2018 program. This 12-month leadership program aims to heighten the impact of women with a science background in order to influence policy and decision making as it shapes our planet over the next decade and culminates in a 3-week female expedition to Antarctica in February-March 2018. We look forward to hearing about her experience on her return.

Being informed and active in the areas highlighted in the bulletin, and more, are part of being a member of the AIP. If you would like to become a member or to renew your membership, go to physics.org.au/joining-the-aip

Going West…the AIP 2018 Congress will be in Perth 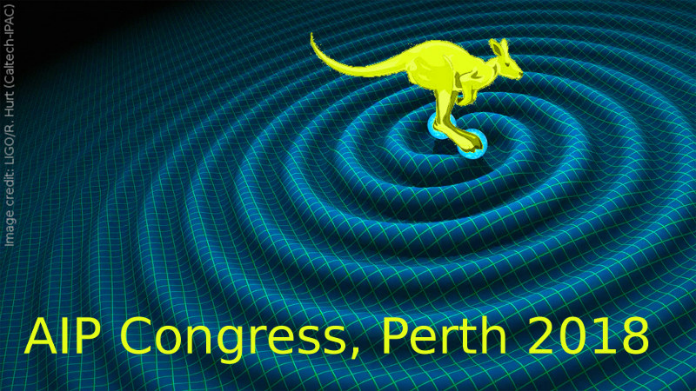 We’re delighted to announce the date and location for the next national Congress: the 23rd National Congress will be held in Perth from 9-14 December 2018, on the campus of the University of Western Australia.

Following on from the success of the AIP Congress in Brisbane in December last year, the 2018 congress aims to continue the tradition of being a big celebration of science, at the highest international level.

Watch this space for calls for symposia and focus sessions, for plenary speaker nominations and (eventually) for abstracts.

The Organising Committee and the Programme Committee also welcome comments, suggestions and ideas pertaining to any aspect of the congress – from ideas for the scientific program and for engagement with the wider community to sponsorship and fundraising concepts. Please see the conference website www.aip2018.org.au for contact details of the committee members.

See you all in Western Australia in December 2018!

Each year, though our membership of Science and Technology Australia, the Australian Institute of Physics is invited to send a representative to Science Meets Parliament. This year that honour fell to Dr Martin White, and ARC Future Fellow from the University of Adelaide. Here is what he had to say about the experience. 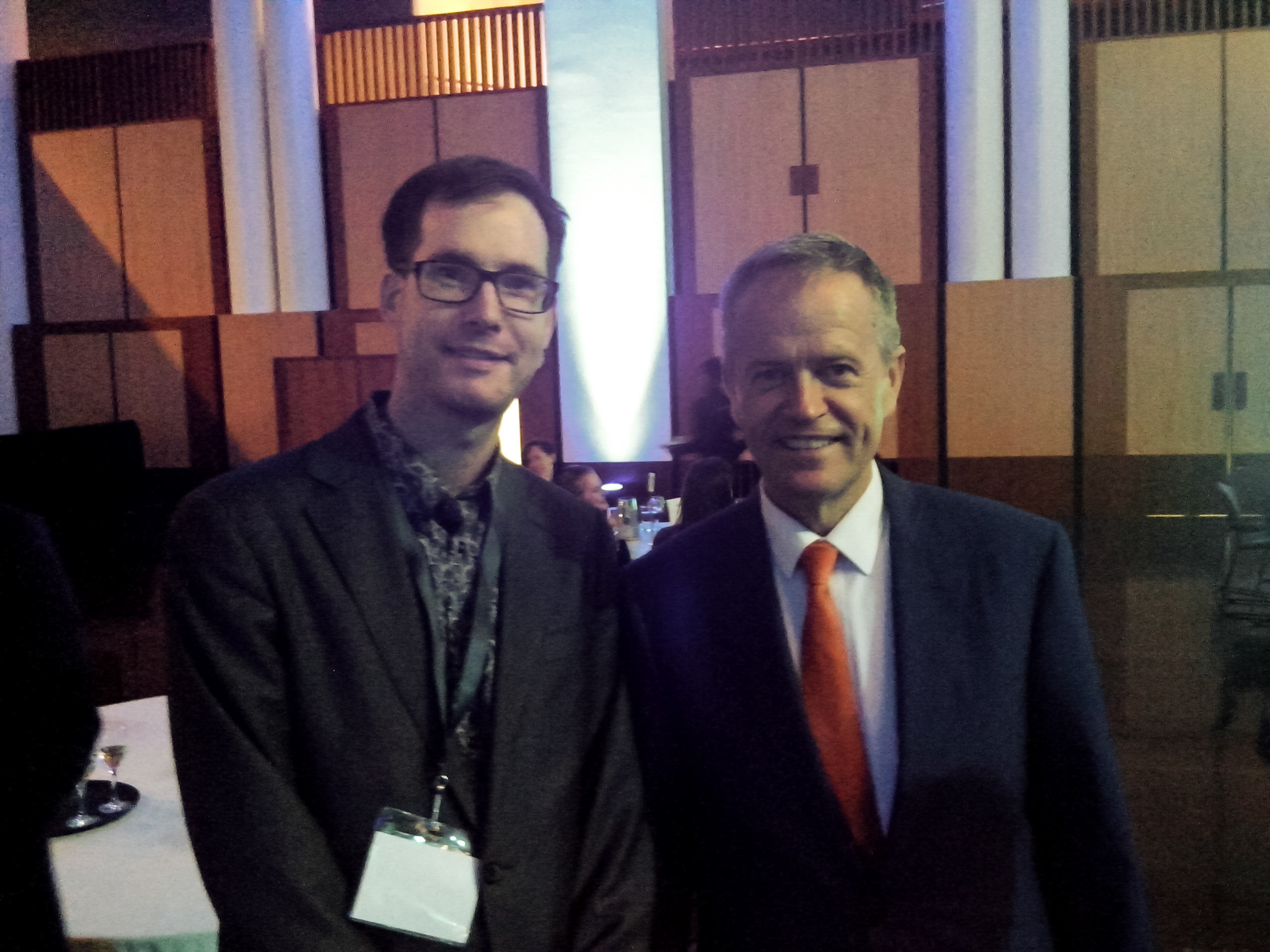 “I arrived in Canberra for Science meets Parliament with mixed expectations. The programme promises two days of excellent training from experts in science communication, plus a series of networking opportunities with both minor and major politicians. However, I wondered how realistic it was to expert to hold conversations with those at the top of the political food chain, particularly with the competition of hundreds of other scientists, journalists and professional networkers. I was also given a meeting with a low-ranking front bench Liberal MP which, although interesting, did not immediately promise a particularly productive future narrative.

“I am leaving Canberra possessed with an almost evangelical zeal to praise this event! In two short days, I have collected a long list of follow up conversations and emails with both senior politicians and other scientists. It proved much easier to gain access to very important people than I had anticipated (though it will take more work to pin them down after the event). The professional training sessions were also genuinely helpful, and structured to make it easy to strike up conversations with other scientists who might share common interests.

“All in all this was a very enjoyable and successful trip and I am enormously grateful to the AIP for the opportunity to attend, and for the financial assistance.”

You can read Martin’s highlights of his trip, and tips for future AIP attendees of this event, in this month’s edition of the member-only bulletin Australian Physics.

Are you taking physics to the people?

This award recognises the work of individuals for community outreach from the discipline of physics. It seeks to acknowledge an individual with a clearly notable record of work in contributing to outreach and physics education, who has demonstrated a passion for the study of physics in NSW.

Nominations for this Award will close on Friday 6th October 2017.

The Award is open to everyone in NSW and will consist of a $500 monetary award and a certificate citing the achievements of the individual.

The Award will be presented at the Australian Institute of Physics NSW Postgraduate Awards and Annual Dinner on Tuesday 14 November 2017 at the University of New South Wales.

Does your uni have the best Physics PhD in Australia?

Nominations for most of the AIP awards are now closed. But you still have until July 1 to submit your nominations for the Bragg Gold Medal for the student judged to have completed the most outstanding Australian physics PhD thesis.

The purpose of the prize is to recognize the work done by a PhD student in Australia that is considered to be of outstanding quality.

Each Australian university may nominate one candidate. Nominations from the universities should reach the Secretary of the local State Branch by 1 July 2017

Reviewers are sought for the following books:

Australian Physics also accepts articles for the bi-monthly magazine, and we strongly encourage our members to contribute their articles.

If you’re interested in reviewing a book or submitting an article to Australian Physics, contact editor Brian James at b.james@physics.usyd.edu.au

The Convenor of the AIP’s Physics Education Group, Dr Maria Parappilly has won the only 2017 D2L Innovation Award in Teaching and Learning prize to be awarded in Physics this year.

The international D2L awards celebrate and recognize up to five post-secondary educators each year for innovative approaches that promote student-centred teaching and learning.

Maria, who is a Senior Lecturer and Course Coordinator: Bachelor of Science (Physics) in the School of Chemical and Physical Sciences, has transformed physics teaching at Flinders by using research-led innovative approaches – many of which have since been adopted far beyond her classrooms.

Her strategies, including Team Based Learning (TBL), Inquiry-Based Lab (IB Lab) – and even “LEGO Physics” – have positively impacted her students over a number of years.

Susan Scott is one of 80 women from around the world for the 2018 Homeward Bound leadership program.

Homeward Bound aims to heighten the impact of women with a science background, in order to influence policy and decision making as it shapes our planet over the next decade. The 12-month program culminates in a 3-week female expedition to Antarctica in February-March 2018.

“This initiative has become somewhat of a global movement and is a fantastic opportunity for women in STEM. I would like to encourage women in the AIP – staff, postdocs and students – to consider applying for the program in future years as this is a 10-year initiative,” says Susan.

She’ll be joined in the program by researchers from around the world as well as Australians from the fields of the health sciences, marine science, medicine, manufacturing, government and more.

You can read more about Susan and the rest of the 2018 team here: https://homewardboundprojects.com.au/participants/2018-participants

Abstracts for “Optics Congress 2017” to be held in Toronto, Canada are due by 19 June.

Follow the below rules before submitting your abstract
http://optics.alliedacademies.com/abstract-submission

Aussie physics in the news

What are we going to do about all this space junk? (ABC)  www.abc.net.au/news/2017-05-31/catastrophic-space-junk-collision-inevitable-without-action/8573808

Launch of Aussie satellites could mark a re-entry for space industry (The Australian) www.theaustralian.com.au/higher-education/launch-of-aussie-satellites-could-mark-a-reentry-for-space-industry/news-story/1a9c860c7faff8d33c4bbe07fd09ace9

How Butterfly wings get their colour (Cosmos) https://cosmosmagazine.com/biology/how-butterfly-wings-get-their-colour

Join the NSW AIP branch at their Physics in the Pub event on June 20 for physics like you’ve never seen it before.

With three 8-minute sets of tightly packed edu-tainment and info-cation.

From hypersonics to the musical astronomer, surfing gravity to physics gangsters, this event will have it all.

Reach a bigger audience. The Australian physics events calendar is the definitive source for physics events around the country. If your physics event isn’t listed here, ask us about adding it, having it included in these regular bulletins, and tweeted from the AusPhysics account.

[NSW] The asteroseismic revolution of red giant stars: from stellar interiors to the structure of the Milky Way
Fri, 9 Jun 2017, 3pm
Macquarie University in room E6B 2.300

[VIC] Girls in Physics Breakfast – Everything you wanted to know about Dark Matter but were afraid to ask
Fri, 21 Jul 2017, 7am
Hawthorn Arts Centre, 360 Burwood Rd, Hawthorn, VIC 3122

[VIC] Girls in Physics Breakfast – Everything you wanted to know about Dark Matter but were afraid to ask
Fri, 21 Jul 2017, 7pm
La Trobe